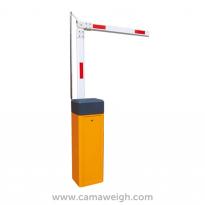 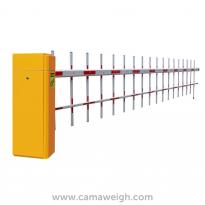 Barriers serve a very important purpose in all kinds of industries. Barriers are intended to restrict flow in any direction. In the weighing industry boom barriers are used alongside weighbridges. They are setup on both ends of weighbridges to guide the vehicle to be loaded. Aside from boom barriers there are different types of barrier. From the simplest up to the most advanced. The type of barrier that Camaweigh offers is the boom barrier. Boom barriers are not movable and need to be fixed on a specific location. They are mostly place on the entrances of building compounds, offices, parking lots, residential areas, and most specifically at toll gates.

What are Boom Barriers?

They are called boom barriers because they consist of a boom, which is a long tubular steel pole used to block a pathway. Typical boom barriers used either circular or square tubular booms. This boom is attached to a pivot point on one end. The operation of boom barriers is either thru manual or automatic operation. Manually operated boom barriers needs to have the end opposite of the pivot point to be raised and lowered to let vehicles pass through. Counterweights are used to do this function and help the operator to lift the boom. The operator needs to manually pull down the boom using either a rope or pulley. Camaweigh’s boom barriers are very reliable and durable. All of Camaweigh’s boom barriers are automatically operated. This means no human operator is needed, thus making it more convenient and fast when loading vehicles onto the weighing platform. They are made from aluminum alloy which is a very durable material which can withstand very large forces of impact. This is very important since boom barriers are supposed to stop anything from passing through it if it is closed.

Camaweigh’s boom barriers have their own designated standard applications in which each type is designed for. The straight arm boom barriers can only move horizontally. Their straight arm boom can only have a certain length because they can’t be made very long. They are also not advised to be used inside buildings or premises with very low vertical clearances. With this condition the best boom barriers to use are the foldings barrier and the fence gate barriers. These barriers by Camaweigh offer more flexibility and horizontal coverage because of their designs. Folding boom barriers, as the name implies, folds up at a certain point which prevents its boom from hitting the roof or ceiling of buildings and parking lots. It can cover more distance than the straight arm barriers while still have stability because of its folding function. Camaweigh’s fence barrier gate is the most suggested boom barrier when you want even more stability and to add more security detail.  This type of boom barrier is similar to regular fences but retract when the barrier opens up. Because of its design, it prevents anything from passing through even below it. The folding barrier and straight arm barriers are great for large vehicles but are vulnerable below their boom arms.

Camaweigh designs smart weighing systems which make use of these types of boom barriers. These smart weighing systems are complete with all the other necessary accessories to make it run efficiently. Camaweigh’s automatic boom barriers make use of NFC cards for operation. In the event of any power failure and disturbances, it is equipped with a battery pack for continued operation.